What’s Exactly The Matter With Me?
MEMOIRS OF A LIFE IN MUSIC
P.F. SLOAN AND S.E. FEINBERG 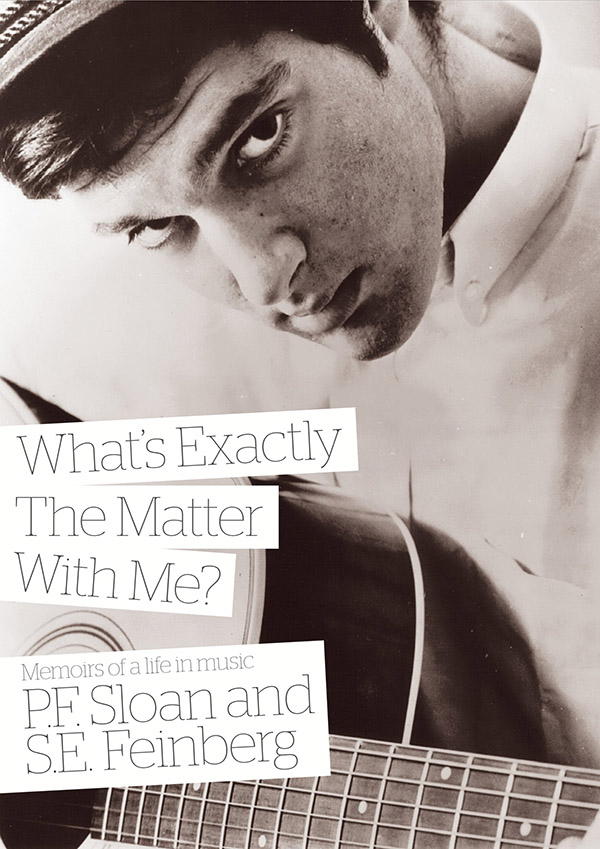 “I have been seeking P.F. Sloan, but no one knows where he’s gone”
—‘P.F. Sloan’ by Jimmy Webb

What’s Exactly The Matter With Me? is a first-person account of an extraordinary life and pilgrimage through the most fascinating years of American and English musical culture. This is a story of dreams, success, destruction, and miraculous resurrection; the incredible, heartbreaking, and ultimately inspiring story of one of the greatest songwriters in American music—and also one of the most elusive and mysterious.

P.F. Sloan was one of the most prolific and influential geniuses to emerge from the golden age of the 60s, and a pioneer of folk-rock. Between 1965 and 1967, 150 of his songs were recorded by major acts, and 45 of those made the charts. No other songwriter has ever come close to achieving so great number of hits in such a short period of time.

From his little studio at Dunhill Records, P.F. Sloan was a veritable hit-machine, writing for The Mamas & The Papas (that’s Sloan’s infectious guitar lick on ‘California Dreamin’’), Jan & Dean (the falsetto you hear on most of their hits is Sloan’s), Barry McGuire (the brilliant and controversial ‘Eve Of Destruction’), Johnny Rivers (‘Secret Agent Man’), The Turtles, The Fifth Dimension, and many, many more.

He wrote so many songs, in fact, that Dunhill sold him as seven different acts. Unsurprisingly, he wound up exhausted and broken, thus beginning a long journey into the wilderness—a journey of UFOs and psychiatric hospitals, healing and survival, and, ultimately, redemption.

P.F. Sloan is a legendary songwriter and performer. Born Philip Gary Schlein in New York in 1945, he moved to California with his family in the late 50s and recorded his first single, ‘All I Want Is Loving,’ at the age of 14. He soon became a key figure on the Los Angeles music scene, writing and appearing on dozens of hit records during pop’s golden age in the mid 60s.

S.E. Feinberg is a playwright, script consultant, and humorist based in Topanga Canyon, California. He has been a P.F. Sloan fan since he was 14 and recently co-wrote, with P.F. Sloan, Louie! Louie!, a musical based on the life of Ludwig van Beethoven.