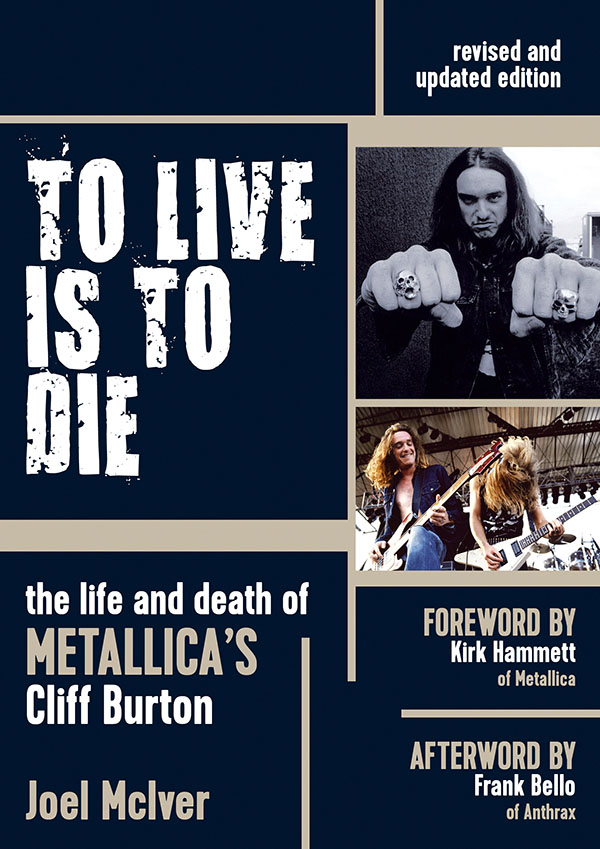 “When we toured with Metallica in 2008–09, I read Joel McIver’s then-just-released Cliff Burton biography. If you haven’t, do yourself a favour, and pick up one of the best biographies you’ll ever read.”  Robb Flynn, Machine Head

Today, Metallica are consummate musicians, but it wasn’t always that way. Their early career is marked by a gradual evolution from garage thrash to sophisticated, progressive heights – an evolution driven by their bass player, Cliff Burton, who pushed the band to new heights with his songwriting ability and phenomenal bass skills across three albums: Kill ’Em All, Ride The Lightning, and their undisputed masterpiece, Master Of Puppets.

Cliff’s life was short but influential; his death at the age of 24 in a tour bus crash on a Swedish mountain road was sudden and shocking. Following his passing, Metallica went on to huge global success, but by their own admission they never pushed the creative envelope as radically as they had done during the first four years of their career.

The cult of Burton grows year on year, with many bassists (even those outside of heavy metal) acknowledging his influence. This revised and updated edition of To Live Is To Die, published to mark the 30th anniversary of his passing, adds a new appreciation of his influence and an afterword by Anthrax bassist Frank Bello.

Praise for the first edition of To Live Is To Die

“Diligently Researched, musically insightful, and flecked with a nice array of original interviews. Particularly good on the enormous influence Burton had on the rest of Metallica.”  Classic Rock

“A superbly detailed account … paints a picture, not just of Burton himself, but also what it was like to be in ’Tallica back in the early days.”  Kerrang!

“Essential … will surely bring a tear to the eye of many an old-school fan of the band, and sheds some light on their troubled early years for the whippersnappers.”  Terrorizer

“This lovingly assembled biography only adds to the legend.”  Record Collector

“The definitive Cliff Burton book. It weaves through the all too short life of this truly amazing man. Any fan of Cliff, Metallica or bass guitar should pick up a copy of this truly great biography.”  Ultimate Guitar

“To Live Is To Die is, to me, the very best book about a rock band, artist, or topic that I have ever read. This book is a grand slam home run, hit with two outs in the bottom of the ninth, to win your team’s first ever World Series. It’s that good … especially to any Metallica fan out there.”  Pitriff

“This book is easily a decade if not two overdue, so to finally have it available to read and absorb is something of a gift from the metal gods … this book is about the closest thing we’ll ever get to knowing or trying to understand Cliff Burton.”  None But My Own

“There are only a few times when a biography can be said to be ‘definitive’, and that certainly is the case here. It is inspiring, it is exhaustive, it is informative, and most of all it is a damn good read that I found hard to put down. Undoubtedly one of the most important biographies released covering this style of music.”  Amplified

Joel McIver lives in High Wycombe, near London, England, and is the author of 30 books on music. As well as writing biographies of leading figures in rock and metal, he has co-written the memoirs of a number of musicians, including members of Megadeth, Deep Purple, Soulfly, the Spiders From Mars, and the Sex Pistols. He contributes regularly to magazines and newspapers such as Classic Rock, Metal Hammer, the Guardian, and the Daily Telegraph.