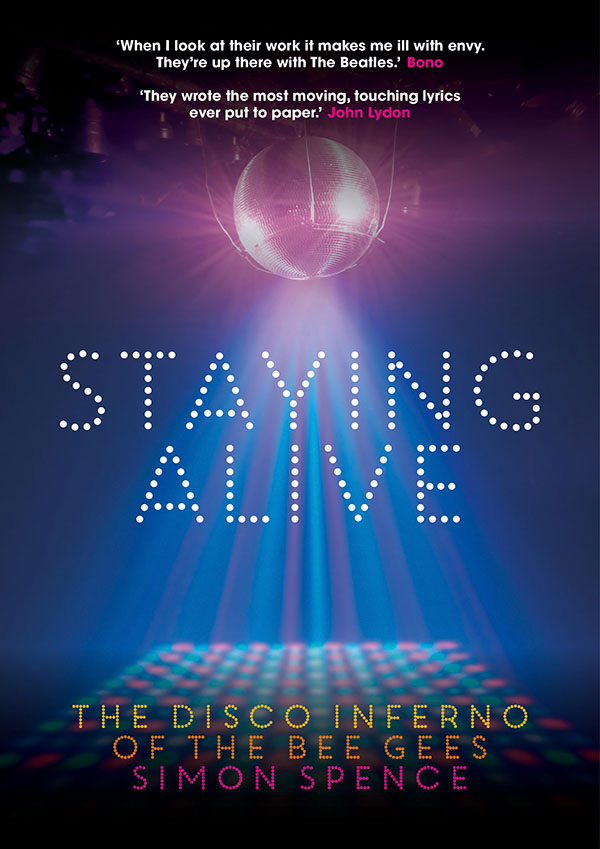 ‘We didn’t know what the film was about. We didn’t know there was a conflict of image that could perhaps hurt us later on. It sort of grew, blew out of proportion.’ BARRY GIBB

In the late 70s, The Bee Gees spectacularly revived their career and, with their soundtrack to Saturday Night Fever, became the biggest disco group in the world. But when the disco boom crashed, they went from icons to punch lines overnight. The band was inescapably frozen in time, all long, flowing manes, big teeth, falsettos, medallions, hairy chests, and skin-tight satin trousers, one finger forever pointing in the air.

The Bee Gees would spend the next forty years trying to convince people there was more to them, growing ever more resentful of their gigantic disco success. ‘We’d like to dress “Stayin’ Alive” up in a white suit and gold chains and set it on fire,’ they said.

Staying Alive finally lifts that millstone from around their necks by joyfully reappraising and celebrating their iconic disco era. Taking the reader deep into the excesses of the most hedonistic of music scenes, it tells of how three brothers from Manchester transformed themselves into the funkiest white group ever and made the world dance. No longer a guilty pleasure but a national treasure.

‘When I look at their work it makes me ill with envy. They are up there with The Beatles.’ BONO

‘They wrote the most moving, touching lyrics ever put to paper.’ JOHN LYDON

‘I cried listening to their music. I knew every note, every instrument.’ MICHAEL JACKSON

‘They will be referred to as some kind of Mozart in today’s history.’ ROBERT STIGWOOD

Simon Spence collaborated with Rolling Stones manager and producer Andrew Loog Oldham on the classic memoirs Stoned and 2Stoned and is the author of the highly acclaimed 2012 biography The Stone Roses: War And Peace and the recent When The Screaming Stops: The Dark History Of The Bay City Rollers. He has written for NME, Dazed & Confused, The Face, i-D, The Independent, Japan Times, International New York Times, and Q.