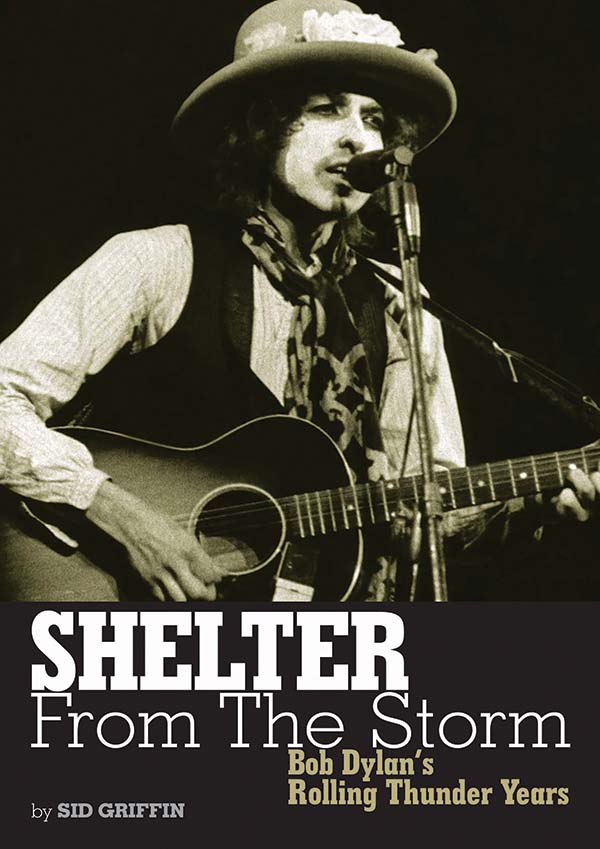 Shelter From The Storm tells the story of Bob Dylan’s Rolling Thunder Revue, the gypsy caravan troupe that lit up US stages between the fall of 1975 and the bicentennial spring that followed. In the company of Joan Baez, Roger McGuinn, Joni Mitchell, Allen Ginsberg, Ramblin’ Jack Elliot, and more, Dylan reinvented the ingenuous troubadour tradition for the cynical 70s – and delivered some of the most thrilling live performances of his career along the way.

Throughout this period, however, Dylan’s personal life was in meltdown. His tortuous love life would be laid bare in improvised acting scenes filmed for Renaldo & Clara. The movie marked his full debut as a director and was shot as Rolling Thunder navigated between New England towns. The bafflingly edited final cut is perhaps Dylan’s most enigmatic and misunderstood work.

Musician and author Sid Griffin examines the genesis of Rolling Thunder, the writing and recording of the 1976 album Desire, for which several key ensemble players were first marshaled, and the influences and implications around Renaldo & Clara. In a plethora of new interviews, unique behind-the-scenes accounts, and deconstructions of tour documents such as the NBC television special Hard Rain, Griffin provides new insight into Dylan’s most legendary tour and offers unprecedented analysis of the musical torrents that came pouring forth as the Thunder rolled.

By the tour’s conclusion, both Dylan and the wider music industry were on the verge of significant transformation. Yet for those few gilded months, all that mattered was the nightly drama of the show and the sparking, transcendent possibilities of rock’n’roll itself. As this important new contribution to Dylan literature makes vividly clear, Rolling Thunder’s headline act proved beyond doubt that he was more than an icon of the fast-fading 60s.