Shadows Across The Moon
OUTLAWS, FREAKS, SHAMANS, AND THE MAKING OF IBIZA CLUBLAND
HELEN DONLON 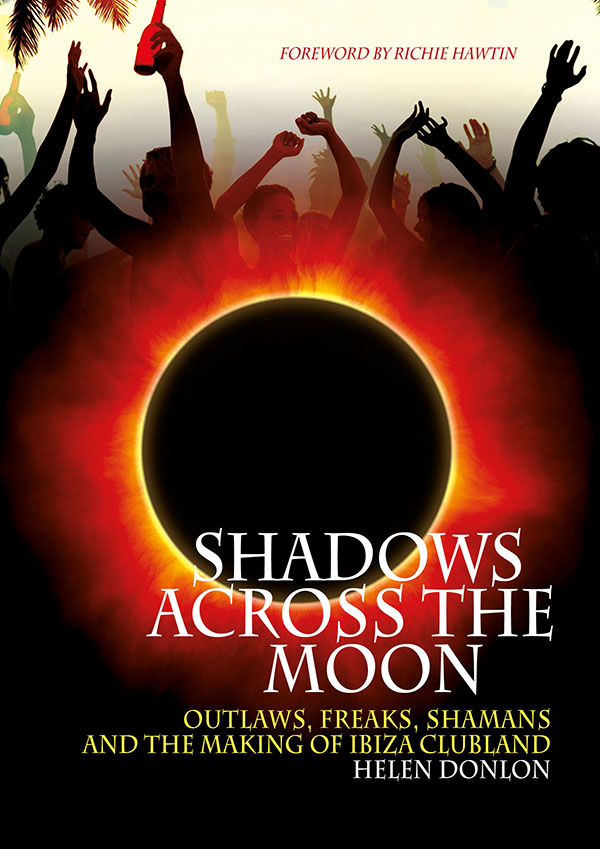 ‘The definitive book on Ibiza’s clubland, and much more! A must-read for every open-minded and free-spirited soul who believes in music and in its power to bring people together as one.’ Producer and DJ Francesco Bergomi

‘Donlon’s prose is of such compelling thrust that I cannot put this book down for longer than it takes to flip a page … it is the finer vibration of holy sunsets, ecstatic sunrises, gentle breezes, and the eternal smell of flowers that the sailors and the lovers know so well.’ Author, musician and filmmaker Tav Falco

‘Gripping and nuanced … the list of people with whom Helen Donlon has spoken for this book is spectacular. Thoroughly informative and highly entertaining. A must-read.’ Ibiza Style magazine

READ AN EXCERPT FROM THE BOOK HERE.

SHADOWS ACROSS THE MOON explores the social and cultural history of Ibiza and its nocturnal playgrounds, from the earliest settlers through the jazz scene, the Goa-influenced outdoor trance-party culture, the hippie clubs, and the second Summer of Love, to the huge and exciting impact the techno scene made on the island’s nightlife with the advent of Sven Väth’s audacious Cocoon. Along the way the book draws back the curtain to reveal clubland’s sometimes shadowy mafia connections, crooked politics, specious drug busts, assassinations, and suicides … as well as tales of quixotic originality and futuristic vision, outrageous pansexual parties, wildly talented impresarios, and the open-air gatherings that make the island so special.

Once a fabled pirate garrison, the Balearic island of Ibiza has been colonised and continually fought over since the era of the Phoenicians. During the twentieth century it gained its reputation as a countercultural hotbed after it became a melting pot for bohemians and dropouts who had come there in search of adventure. Soon, Ibiza was a crossroads for experimental musicians, writers and artists, ‘hippie trail’ travellers, enthusiastic trepanation pioneers, infamous art-world conmen, Osho sannyasins with pockets full of MDMA—and, eventually, the epicentre for electronic music that it is today.

After the establishment of the famous hippie markets and the trance parties that took place in forests or on deserted beaches, a number of now legendary nightclubs, including Ku, Pacha and Amnesia, began to emerge, although they started out as simple, rural affairs. These days, pioneering electronic-music DJs from around the world make the island their home from home over the summer season, attracting an equally international party community. Ecotourists and nature lovers seeking the particular pleasures of Ibiza also flock in annually, as does a crucial contingent of island faithfuls who return year after year to this tiny but charismatic and insubordinate Mediterranean hub to live an Ibiza ‘experience’ that goes way beyond the parties.

RICHIE HAWTIN is a Canadian electronic musician and DJ. An influential figure during the second wave of Detroit techno in the 1990s, he is best known for his work as Plastikman and his ENTER. events in Ibiza and around the world.