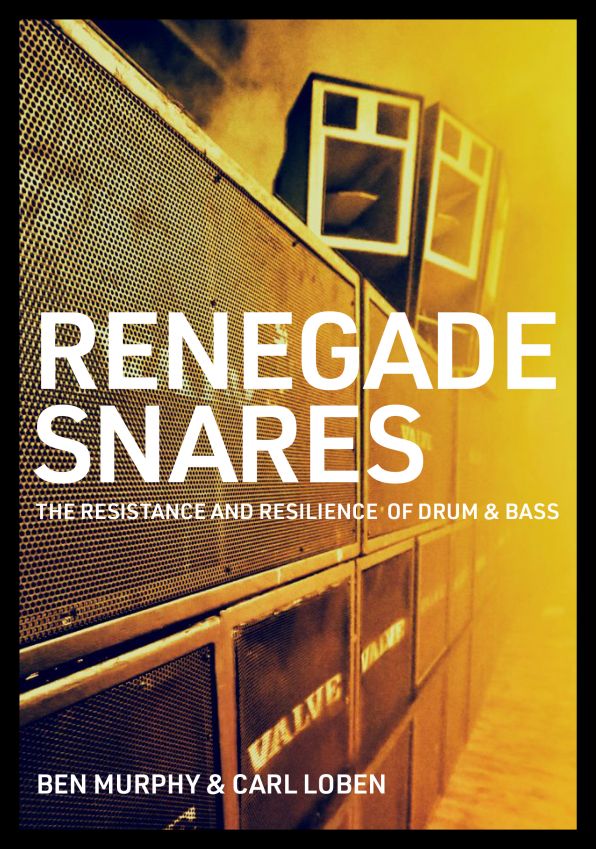 ‘This book is the truth. No holds barred, it lays it down as it is, and shows with concise clarity the tribalism within this beautiful drum & bass culture. This is definitive for me.’ GOLDIE

‘Few experiences I’ve ever had have matched the incendiary, jaw-dropping full-on vibe of walking into the Blue Note in Hoxton and experiencing what was then known as jungle. This brilliant and essential work contextualizes the roots of drum & bass and the work of the great pioneers of this British dance music phenomenon.’
IRVINE WELSH

‘A real drum & bass story, beautifully woven together from the influences to the present day . . . highly recommended.’ JUMPIN JACK FROST

Renegade Snares is the definitive book on drum & bass music. Pieced together using original interviews conducted with all the scene’s main players, it traces the history of jungle/drum & bass from its early roots in soundsystem culture and rave music right through to the present day.

With its hyper-speed breakbeats, warping bass pressure, and vast spectrum of sounds, drum & bass quickly spawned a whole new movement in youth culture. What began as an outlaw street reverberation from the inner cities of Britain developed into a Mercury-winning, chart-topping, world-conquering genre in just a few short years. The frontier-breaking sorcery that emanated from its foundational producers and DJs pushed new levels of sonic science into the music world, and it has influenced all other electronic music genres in assorted ways.

From the shock of the new to a global phenomenon, drum & bass has morphed from frowned-upon marginalisation to establishment approval—and back again. A multicultural triumph, it is a story of resilience and resistance that takes in pioneers such as Goldie, Roni Size, Kemistry & Storm, Photek, Fabio & Grooverider, and many more renegade mavericks—even, at one point, David Bowie.

With vivid descriptions of key tracks and a detailed lineage of the scene’s development, Renegade Snares traces the genre’s gestation while also examining its musical twists and turns, worldwide spread, and enduring popularity. And, ultimately, it asks: surely a genre of music with such a significant grounding in black music culture, developed by so many black pioneers in its formative years, could never be ‘whitewashed’ . . . could it?

Ben Murphy is the former editor-in-chief of DJ Magazine. He began writing about music in 2003 and has since contributed to many titles, including the Guardian, Red Bull Music Academy, Bandcamp Daily, i-D, Clash, Crack, Vinyl Factory, FACT, Knowledge, Electronic Sound, and XLR8R, as well as writing sleeve notes for Warp Records and Harmless. A long-time electronic-music obsessive, it was buying a Photek 12-inch in 1995 that put him on the path of jungle/drum & bass discovery. He went to Goldie’s first live show at Kentish Town Forum, and ever since he has been a passionate advocate for drum & bass and other styles of electronic music.

Carl Loben fell in love with jungle/drum & bass in the early 1990s, while living in Hackney, and soon started evangelising for the sound. He interviewed many of its 90s pioneers at the time, writing articles in Melody Maker and Generator about the music, and DJing drum & bass everywhere from underground parties to Movement to the ICA. Residing at DJ Magazine since just before the millennium, as a continuing fan he’s carried on playing and dancing to and writing about—or commissioning stories on the evolution of—drum & bass ever since. He’s currently the editor-in-chief of DJ Magazine.