Neil Sedaka: Rock’n’roll Survivor
THE INSIDE STORY OF HIS INCREDIBLE COMEBACK
RICH PODOLSKY 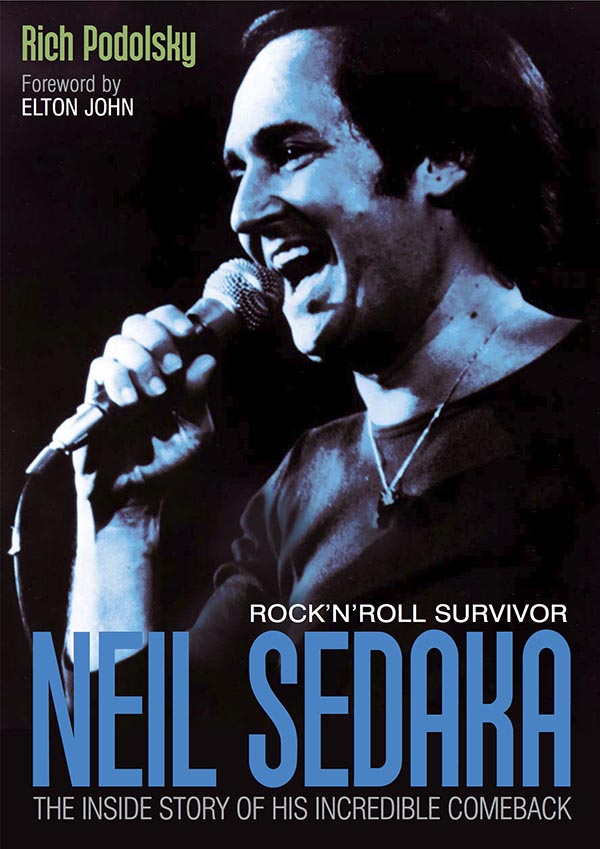 “When ‘Laughter In The Rain,’ ‘Bad Blood,’ and ‘Love Will Keep Us Together’ all reached number one in 1975, they said, ‘Sedaka’s back.’ It was a thrilling ride for me that signaled the end of a long, hard climb back to the top. I want to thank Rich Podolsky for accurately capturing those years in this wonderful book.”
Neil Sedaka, May 2013

“A fascinating book on a fascinating subject. I couldn’t wait for the next chapter. Not only is Neil Sedaka an outstanding songwriter and artist, he has lived an astonishing life. This is better than fiction. You couldn’t make this up.”
Music historian and broadcaster Paul Gambaccini

From 1958 to 1963, Neil Sedaka sold 25 million records—more than anyone except Elvis Presley. He thought he could do no wrong, but a year later he was all but off the charts, swept away by The Beatles and the British Invasion—a blow he never saw coming. The deejays stopped playing his records, and the public stopped buying them.

For 12 agonizing years, Sedaka battled to get back on the charts—back to respectability. He tried everything: working with hip, young songwriters, playing on demo sessions, and even enduring the rough and tumble of working men’s clubs in remote corners in the UK. Then, one magical night, he performed at the Royal Albert Hall in London. His new songs, including ‘Solitaire,’ were greeted with thunderous applause.

Shortly thereafter, Elton John, the biggest rock’n’roll star of the decade, stopped by to see him and offered to sign Neil to his new label, Rocket Records. “Great songwriters always re-establish themselves,” Elton writes in the foreword to this book, “because they don’t stop writing great songs.”

And that was it. In October 1974, ‘Laughter In The Rain’ showed up at number 95 on Billboard—Sedaka’s first appearance on the charts in over a decade. Sixteen weeks later it reached number one, sealing one of the most amazing comebacks in music history. This vivid and authoritative book, written with full access to Sedaka and those closest to him, tells the absorbing story of how he overcame one obstacle after another to become the ultimate rock’n’roll survivor.

Rich Podolsky, an established writer and reporter since the 70s, has been a staff writer for CBS and won the prestigious Pennsylvania Newspaper Publishers’ Keystone Award for writing excellence. His passion for music of the 60s and 70s has led him to tell this insider’s story of Neil Sedaka’s amazing comeback. He is also the author of Don Kirshner: The Man With The Golden Ear. Podolsky and his wife, Diana, live in Manhattan with their 16-year-old twins, Sarah and Daniel.