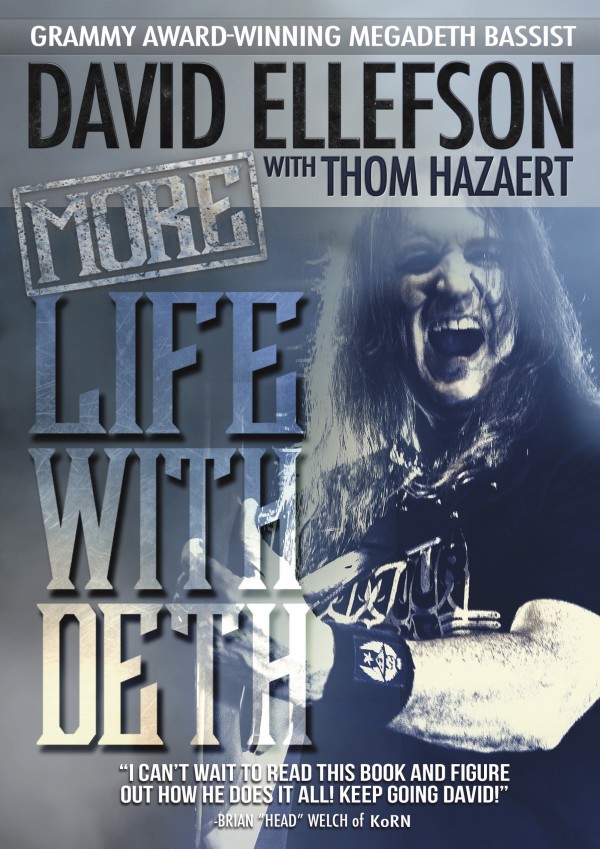 I can’t wait to read this book and figure out how he does it all! Keep going, David!
—Brian ‘Head’ Welch (KoRN)

In this follow-up to his 2013 memoir My Life With Deth, Megadeth bassist and co-founder David Ellefson carries on where he left off, charting his mid-2000s departure from Megadeth through his triumphant return in 2010, and offering an inside look at the continuing saga of one of the world’s biggest and most enduring heavy-metal bands.

Co-written with his business partner, Thom Hazaert – a celebrated music-industry figure, radio personality, and music journalist – More Life With Deth chronicles Megadeth’s record-shattering ‘Big Four’ shows alongside Metallica, Slayer, and Anthrax, and the release of their Grammy-winning Dystopia – their highest-charting record in over twenty-five years – and the massive two-year world tour supporting it.

Far more than your typical rock star tell-all, More Life also delves deeper into the origins of Megadeth and David’s roots in rural Minnesota, and tells the stories behind the creation of his hugely successful EMP Label Group, Ellefson Coffee Co., and the relaunch of the famed metal label Combat Records, as well as his continued personal journey of spirituality and sobriety.

From humble farm roots in Jackson, Minnesota, David Ellefson went on to become the bassist and co-founder of Grammy-winning thrash titans Megadeth, a member of the metal collective known as the Big 4, alongside Metallica, Slayer, and Anthrax. Megadeth have sold over thirty million albums worldwide during their storied thirty-five-year career. Ellefson is also an accomplished author, producer, clinician, music-business lecturer, and entrepreneur, presiding over a global brand portfolio, including his own record labels EMP Label Group and Combat Records, as well as his global coffee shingle, Ellefson Coffee Co. His literary works include the music-business self-help guide Making Music Your Business … A Guide for Young Musicians (Hal Leonard) and My Life With Deth (Howard Books/Simon & Schuster), which was co-written with Bass Player editor Joel McIver.