What’s Big And Purple And Lives In The Ocean?
THE MOBY GRAPE STORY
CAM COBB 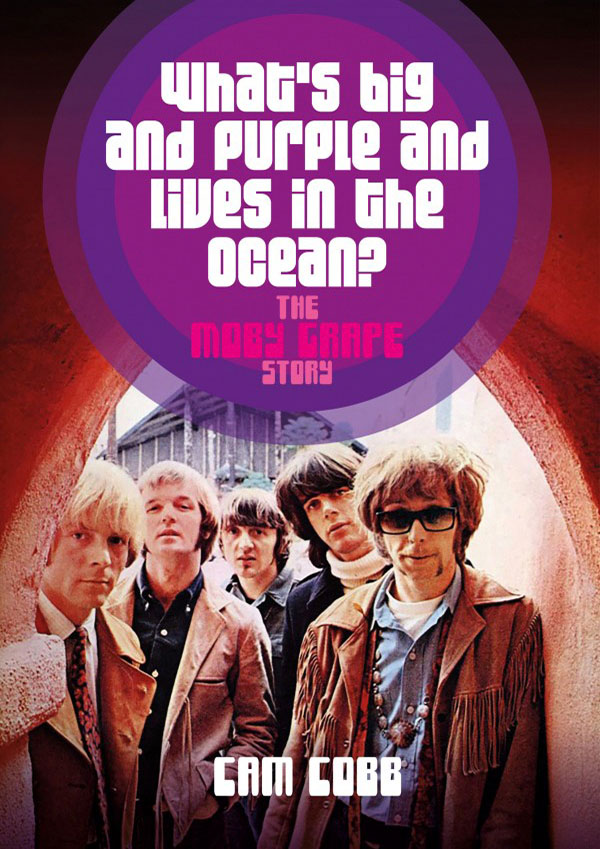 So much comes down to luck. Suddenly, things stop working out, our management, the five singles; so many things stopped working. How the hell did that happen? Why didn’t we do a second album of all our favorite rock’n’roll songs from the 50s? That could’ve kicked ass, and we could’ve taken a deep breath before writing new material. I don’t know. But I’m grateful and fortunate for the history that we have. So I don’t know. With Moby Grape, it could’ve been more, and it could’ve been less. A lot has to do with luck.
DON STEVENSON, Moby Grape drummer and songwriter

Moby Grape are a genuine cult phenomenon. Their story, a mixture of myth and truth, is a cautionary tale, a triumph, and a tragedy all at once.

Though they are seen as a symbol of 1960s San Francisco, Moby Grape were never actually a part of the city’s counterculture movement. Yet they were immersed in it, sharing stages with the likes of Aretha Franklin, Jimi Hendrix, Sly Stone, and many more.

Moby Grape’s five members came together from very different backgrounds, bursting onto the San Francisco scene in the fall of 1966. With their diverse pedigrees, they were nothing less than musical alchemists, yet they were also rebels. Their blending of genres within a tight songwriting framework contrasted sharply with that of many of their SF peers.

Following the release of their debut album in 1967, everyone from Ringo Starr to Jimi Hendrix could be seen sporting a ‘Moby Grape Now!’ button. But in the months that followed, they were dogged by mismanagement, bad marketing, a scandalous drug bust, and general rock’n’roll mayhem. Since then, they have broken up, staged rock’s first full-on reunion, and fought to retain ownership of their own name.

Despite all of this, they produced one of the best albums of the era, and today they are heralded by countless luminaries of rock music and rock criticism, from Robert Plant to Robert Christgau, Tom Waits to Greil Marcus.

About the author
Cam Cobb writes about such things as narrativity in pedagogy and the arts. He also researches and writes about social justice in education. His work has been published in a variety of journals and books, including Per la filosofia, Cinema: Philosophy And The Moving Image, and Bowie And Philosophy: Rebel Rebel. He is an associate professor at the University of Windsor in Canada, and co-author of Next To The Ice: The Culture And Community Of Hockey In Canada (Mosaic Press).