I Scare Myself
(A memoir)
Dan Hicks 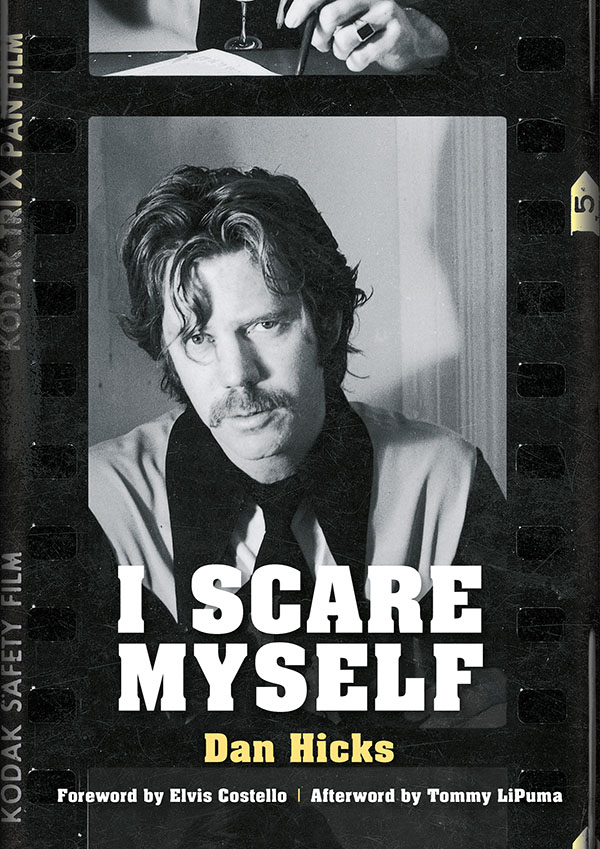 We won’t leave any stone unturned here. We’ll get to all the stones, because I’m a giver.
—Dan Hicks

There are lots of people who can point to music on the shelf. Some like to light candles to it, others seek only to snuf them out. Dan burned them all brightly, and here is his tale.
—Elvis Costello, from his foreword to this book

Dan Hicks didn’t have his heart set on a career in music. It all just sort of happened to him. It didn’t hurt, of course, that he was in the right place at the right time—San Francisco, 1966—and had a front-row seat for the birth and death of the counterculture.

Among other things, I Scare Myself is a classic story of the 60s. More importantly, though, it’s a story of musical genius. By the time the Summer of Love limped to a close in the fall of ’67, Dan Hicks had quit The Charlatans—the pioneering psych-rock band with whom he played the drums—and turned to jazz, the music he’d secretly loved all along, as he began building his own band.

‘I just started taking ingredients I liked and putting them together to see what came out,’ he writes. What came out was an amazing blend of complex time signatures, unusual instrumentation, and intricate vocal harmonies that took him to the top of the 70s rock world but also into a downward spiral of drink and drug abuse.

Emerging from a long wilderness, which he details here with wit and candor, Dan eventually returned to recording and performing, making a number of acclaimed albums, including Beatin’ The Heat, a set of duets with Tom Waits, Elvis Costello, Rickie Lee Jones, and more. Along the way, his music continued to subtly permeate the culture, turning up everywhere from The Sopranos to commercials for Levi’s and Bic.

Though he passed away in early 2016, Dan’s music, and the stories he tells here, remain as fresh and irresistible as ever. Combining those stories with dozens of rare photographs and an annotated discography by the writer and critic Kristine McKenna, I Scare Myself takes readers on a journey behind the music and into the life and mind of the fantastic artist who created it.

‘Dan Hicks is lightning in a bottle.’ Bette Midler

‘Dan’s songs were funny, serious, and entertaining, and the combo of old-timey folk, country, and jazz knocked me out.’ Matt Groening, creator of The Simpsons

Dan Hicks was a singer and songwriter whose work blurred elements of folk, jazz, country, and swing into something entirely his own. Born in Little Rock, Arkansas, in 1941, he moved to California as a child and found himself at the center of the San Francisco scene in the mid 60s. After a brief stint in The Charlatans, Dan formed The Hot Licks, releasing the classic albums Striking It Rich and Last Train To Hicksville. He continued to perform and make records into his seventies. He died of cancer in February 2016.