Confessions Of A Heretic
THE SACRED AND THE PROFANE: BEHEMOTH AND BEYOND
ADAM NERGAL DARSKI WITH MARK EGLINTON 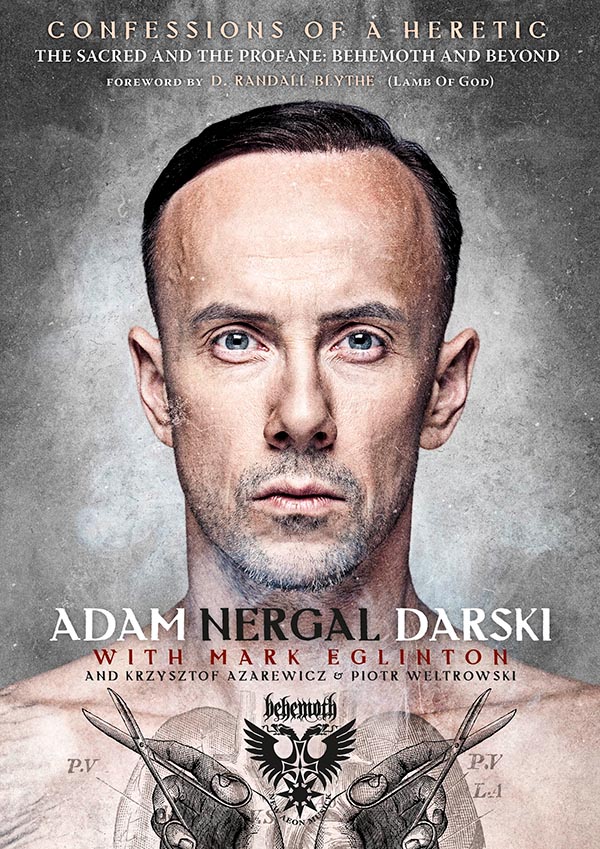 “REBELLION IS A PART OF YOUTH. SOMETIMES IT’S DANGEROUS. INSTEAD OF A SWORD, I HOLD A GUITAR IN MY HANDS. I’M IN THE SAME, RIGID WORLD, BUT INSTEAD OF MOLOTOV COCKTAILS, I’VE GOT A COMPUTER. IT’S A MUCH MORE POWERFUL WEAPON.”

Confessions Of A Heretic is the forthright and erudite memoir of Adam Nergal Darski, the frontman and driving force behind the Polish extreme metal group Behemoth, currently at the top of their game following the release of their 2014 US Top 40 album The Satanist.

Presented as a series of interrogations by friends and associates, and with a foreword by Lamb Of God frontman D. Randall Blythe, the book reveals a complex man of great contrast—a health-conscious, highly personable intellectual known for his extreme views and even more extreme music—lifting the lid on everything from his clashes with the Polish Catholic Church to appearing as a judge on the Polish version of The Voice to his battle with leukaemia.

Born in Gdynia in 1977, Adam Nergal Darski is a Polish musician and singer best known as the leader of the internationally renowned extreme metal group Behemoth, with whom he has recorded ten studio albums across three decades, the most recent of which is The Satanist.

Mark Eglinton is a bestselling author and ghostwriter. Specialising primarily in memoir and non-fiction, his books include Official Truth: 101 Proof—The Inside Story Of Pantera with bassist Rex Brown, widely acclaimed as one of the most honest music memoirs of recent years.

Krzysztof Azarewicz is a Polish-born psychonaut and the founder and director of Lashtal Press, which publishes books by Aleister Crowley, Austin Osman Spare, and others. He’s been involved in writing lyrics for Behemoth since 1998. He travels extensively with his partner, Ania, exploring magical realms of existence, from Tibetan plateaus through the pyramids and deserts of Northern Africa to the occult scenes of Berlin, London, and New York.

Piotr Weltrowski is a professional journalist, accredited philosopher, and musician who currently works for Trojmiasto.pl. In the 90s, he was associated with the Polish alternative metal scene. He played with Nergal in The Wolverines and was a guest on several Behemoth albums.