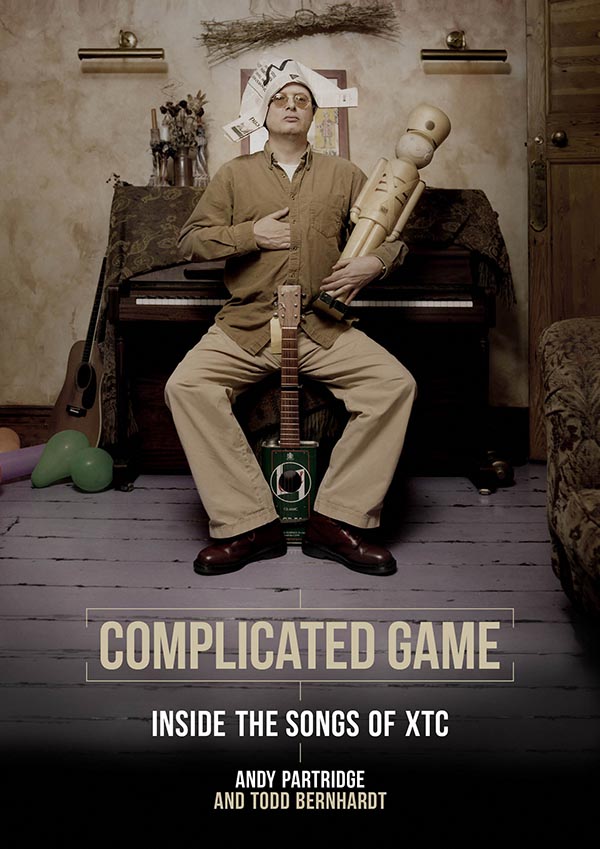 “I LIKE ACCIDENTS. I LIKE TO PUT MYSELF IN THE WAY OF MUSICAL HARM. I LIKE BEING AT THE WHEEL OF THAT MUSICAL CAR, AND AIMING IT AT THE WALL, JUST TO SEE WHAT SHAPE THE CAR’S GOING TO COME OUT. IT MIGHT COME OUT AN INTERESTING SHAPE THAT WOULD HAVE TAKEN ME FOREVER TO DECIDE ON OTHERWISE.” Andy Partridge

Complicated Game offers unique insight into the work of XTC founder Andy Partridge, one of Britain’s most original and influential songwriters. It is also an unprecedentedly revealing and instructive guide to how songs and records are made.

Developed from a series of interviews conducted over many months, it explores in detail some thirty of Partridge’s songs—including such well-known singles as ‘Senses Working Overtime’ and the controversial ‘Dear God’—from throughout XTC’s thirty-year career, as well as an extensive interview dedicated solely to the art and craft of songwriting.

While the interviews cast new light on the writing of lyrics, the construction of melodies and arrangements, the process of recording, and the workings of the music industry, they are also filled with anecdotes about Partridge, his XTC bandmates, and their adventures around the world— all told with the songwriter’s legendary humour.

This fascinating book also includes pages from Partridge’s songwriting notebooks and reproductions of his original artwork designs; a guided tour of his hometown of Swindon; and a foreword by Steven Wilson, the guitarist, songwriter, and record producer best known as the founder and leader of Porcupine Tree.

Born in Malta but raised in Swindon, England, where he still lives, Andy Partridge is a singer, songwriter, and guitarist. He is the founder of the internationally renowned new-wave group XTC, with whom he recorded fourteen widely acclaimed albums—among them English Settlement, Drums & Wires, and Skylarking—during a career spanning four decades.

Todd Bernhardt has played, recorded, and toured with a number of bands based in the Washington DC area. He also has years of experience in corporate communications and freelance writing, having created pieces for Modern Drummer magazine and a number of other music-related publications. He’s proud to be the father of two wonderful children, lover of a beautiful woman, and friend of Andy Partridge.

Advance praise for this book

Chock full of fascinating information from the mind of one of the most brilliant songwriters of our time. No one else does what Master Partridge does. This book tells us why. ADRIAN BELEW (KING CRIMSON, DAVID BOWIE, TALKING HEADS)

Delving deeply into history, process, harmony, rhythm, and lyrics, this vivid and insightful tome contains the very conversation I wish I could have with Supreme Musical Strategist Partridge. He and Todd Bernhardt have handed us a treasure trove of juicy detail that is easily the ultimate XTC geek-fest! GREGG BENDIAN (ORNETTE COLEMAN, TODD RUNDGREN, ZOOT HORN ROLLO)

A phenomenal blow-by-blow account of the behemoth that is the XTC scrapbook. As a teenager, I was knocked out from note one by Andy Partridge & Co. From the blistering, amphetamine-paced early records, to the slanted perfection of Black Sea, Mummer, The Big Express, and so on—these records illustrate the endless possibilities of recorded music. The exceptional song craft and emotional range rarely give you what you expect, which is something I always appreciated. I owe a tremendous debt to Andy for his lead-by-example definition of a true maverick. Read this book. JASON FALKNER (JELLYFISH, THE GRAYS, BECK)

If you think you know what makes Andy Partridge tick—and if you believe you’re read, heard and/or gleaned everything there is to know about the music of XTC—prepare to have that belief system blown to smithereens. Every one of these gloriously comprehensive interviews is loaded with valuable information that will deepen and enhance your understanding of this fascinating man and his unremittingly beautiful, inspiring music—and give you a thousand hearty belly laughs in the process. And all hail Todd Bernhardt for a constant line of well-informed questioning—representing well the hardcore XTC fandom without stepping over into sycophancy, he knows precisely how to elicit the kind of priceless nuggets of information fans are starving for. MIKE KENEALLY (FRANK ZAPPA, SCREAMIN’ JAY HAWKINS, ANDY PARTRIDGE)

Like Todd, I LOVE XTC! I had the pleasure of seeing the band twice in 1980, and later had the unique opportunity of spending weeks with them in the studio. (Dare I say, it was almost like being in the band!) I know rst-hand how obscenely brilliant these gents are, and take great delight in reading the details of songs that meant so much to me. This great reference book is going on the shelf next to my dictionary. Vive la XTC!!!! PAT MASTELOTTO (MR. MISTER, KING CRIMSON, XTC)

Todd’s book has gone into some serious detail here—it is indeed a ‘good read’. Recording Nonsuch was a career highlight for me; I’d have to have been an idiot to screw up material as great as that! A big ‘thank you’ to XTC for asking me to play with them—’twas a real pleasure. DAVE MATTACKS (FAIRPORT CONVENTION, NICK DRAKE, XTC)

Andy Partridge is a wasp—his sting is lethal and he’s stung us all with his exoskeletal genius. I loved drumming in his hive. I’m bugged. PRAIRIE PRINCE (TUBES, TODD RUNDGREN, XTC)

Andy Partridge’s body of work is the deepest, strongest, and most interesting of any songwriter of the last 40 years. He is intensely influential because he is a musician’s musician. We, the faithful, know this to be fact, and now have this set of probing interviews to dig into, to perhaps get a sense of how this brilliant madman thinks, works, and creates. On behalf of XTC fans, Partridge fans, Music fans—thank you for this book. DAVID YAZBEK (THE FULL MONTY, ROTTEN SCOUNDRELS, WOMEN ON THE VERGE OF A NERVOUS BREAKDOWN)