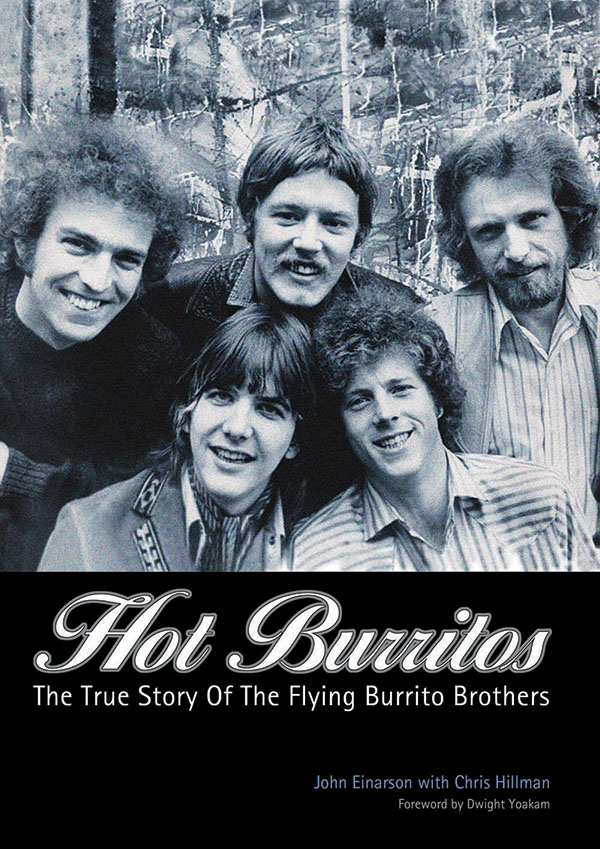 Hot Burritos is the first ever biography of the band, as told to writer John Einarson by founding Burrito Chris Hillman and other group members and associates.

Forty years ago, former Byrds Chris Hillman and Gram Parsons released The Gilded Palace Of Sin, the debut album by their new band, The Flying Burrito Brothers. Desperados in sequined Nudie suits fired by a dream to pull rock music back from the psychedelic abyss and return it to its pure and simple country roots, The Flying Burrito Brothers were avatars of a whole new genre that still thrives. Although a connoisseurs choice from the off, that debut and the band’s subsequent releases didn’t sell too well, but The Flying Burrito Brothers have since transcended cult status to earn universal respect and admiration. Widely regarded as the original country-rock band, you can hear their influence in mainstream mid-70s country-rock (The Eagles, Jackson Browne and Linda Ronstadt) the current crop of Nashville country-pop (Alan Jackson and Brad Paisley), and the whole alt.country/Americana underground.

Previously guarded about the group’s history, Hillman offers an intimate portrait of his doomed bandmate Gram Parsons, and a colourfully detailed, deeply insightful, hard-hitting and personal account of one of contemporary music’s most respected and innovative bands.

John Einarson is the author of 12 books including the critically-acclaimed Mr. Tambourine Man: The Life & Legacy of The Byrds’ Gene Clark (Backbeat Books, 2005), voted among the 20 best books of 2005 by Uncut and Record Collector, and Desperados: The Roots of Country Rock (Cooper Square Press, 2001). He is widely acknowledged as an expert on country-rock and an authority on the life and career of Neil Young. Einarson wrote the Bravo TV documentary Buffy Sainte-Marie: A Multimedia Life and served as consultant for A&E/Biography Channel’s Neil Young Biography episode and CBC TV’s Life & Times of Randy Bachman based on his biography of the Canadian music icon, Takin’ Care of Business (McArthur & Co., 2000). He has written for Mojo, Goldmine, Discoveries, Record Collector, Shindig! and Rock Express and is a contributor to the Winnipeg Free Press. Einarson lives with his family in Winnipeg, Canada.

Chris Hillman is a founding member of folk-rock pioneers The Byrds, country-rock rebels The Flying Burrito Brothers, Manassas, Souther, Hillman & Furay, and The Desert Rose Band. He is a widely respected musical innovator and is regarded as one of the founding fathers of country-rock. Hillman continues to record and tour with longtime musical partner Herb Pedersen. He lives with his family near Santa Barbara, California.