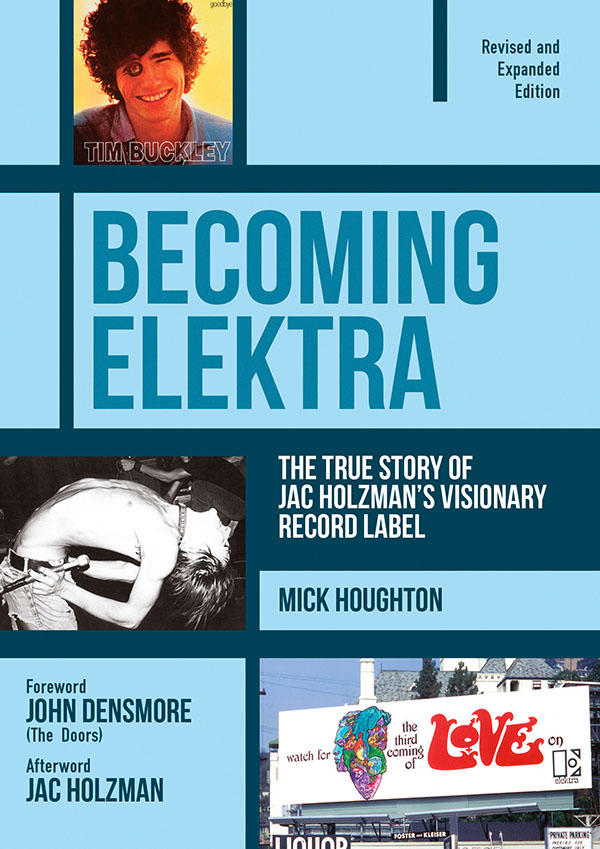 Jac Holzman had a beautiful label called Elektra Records. They put out Judy Collins, Tim Buckley, The Doors, and Love. He dressed mod and he treated us very gently. He was a civilized man. He obviously loved the arts, but what he really wanted to do was build his business – and he did. He had his own concerns, and style, and you had to serve them, and of course when he sold out, as all indies do, you were stranded culturally in the hands of a cold clumsy conglomerate. But he put us in the right studios with the right producers and he tried to get us seen in the right venues and it really helped. This is a good example of the industry.
—IGGY POP, John Peel Lecture, 2014

Becoming Elektra tells the incredible true story of the pioneering Elektra Records label and its far-sighted founder, Jac Holzman, who built a small folk imprint into a home for some of the most groundbreaking, important, and enduring music of the rock era.

Placing the Elektra label in a broader context, the book presents a gripping narrative of musical and cultural history that reads like an inventory of all that is exciting and innovative about the 60s and 70s: The Doors, Love’s Forever Changes, Tim Buckley’s Goodbye & Hello, The Stooges, the MC5’s Kick Out The Jams, Queen and Queen II, The Incredible String Band, Carly Simon’s No Secrets, and many, many more.

This fully revised and expanded edition includes a brand new foreword by John Densmore of The Doors and draws on extensive new interviews with a wide range of Elektra alumni, including Lenny Kaye, Joe Boyd, Tom Paley, Johnny Echols, Jean Ritchie, and Bernie Krause, as well as further conversations with Holzman himself. It also adds two new chapters: a look at Elektra in Britain in the 60s and a reappraisal of the label’s 70s output.

MICK HOUGHTON is a music publicist and journalist who bought his first Elektra LP in 1966. Since 1978, he has looked after the Ramones, Talking Heads, Undertones, Echo & The Bunnymen, Julian Cope, Sonic Youth, The Jesus & Mary Chain, The KLF, Spiritualized, XTC, Bert Jansch, and Richard Thompson, among many others.

He is the author of the acclaimed I’ve Always Kept A Unicorn: The Biography Of Sandy Denny (2015), and his writing has appeared in Let It Rock, Circus, ZigZag, Sounds, Time Out, Mojo, and Uncut.

He was one of the compilers and producers of – as well as writing the accompanying book for – the Grammy-nominated Forever Changing: The Golden Age of Elektra 1963–1973 boxed set.

JOHN DENSMORE is a musician and songwriter best known as the drummer in The Doors. He is the author of the bestselling autobiography Riders On The Storm (1990) and The Doors: Unhinged (2013). 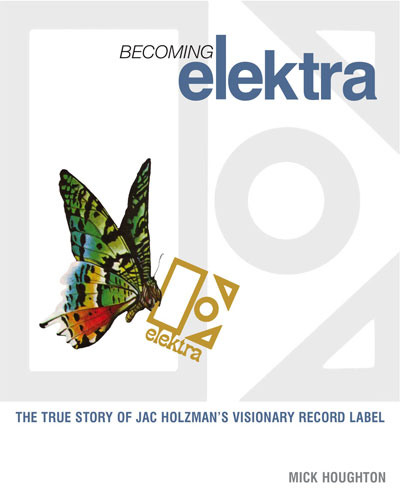 PRAISE FOR THE FIRST EDITION OF BECOMING ELEKTRA:

“The ideal guide to a catalogue brimming in madcap genius and the occasional well-adjusted success story.” Mojo

“This meticulously researched history taps into founder Jac Holzman’s folk roots to tell the stories from the bohemian spring that preceded the summer of love … an essential artefact.” Q

“That rare kind of book which succeeds on every front … perfectly encapsulates the enigmatic, unpredictable spirit of a label which has instigated musical sea-changes and tantalised collectors for decades.” Record Collector

“This memorably thorough account shows Holzman’s qualities in spades … passion with pragmatism and the courage to embrace new forms.” The Wire

“A cracking new biography of the pioneering Elektra label and its firestarter, Jac Holzman.” The Word

“A dazzling narrative that goes way beyond the realms of geeky musos.” The Sun

“A righteous volume … when your subject matter is as culturally rich as Elektra’s back catalogue, well, readers can only utter the occasional ‘sheesh, I’ll just read for another five mins’ before watching the whole day slip seamlessly away.” Julian Cope