Bathed In Lightning
JOHN MCLAUGHLIN, THE 60S AND THE EMERALD BEYOND
COLIN HARPER 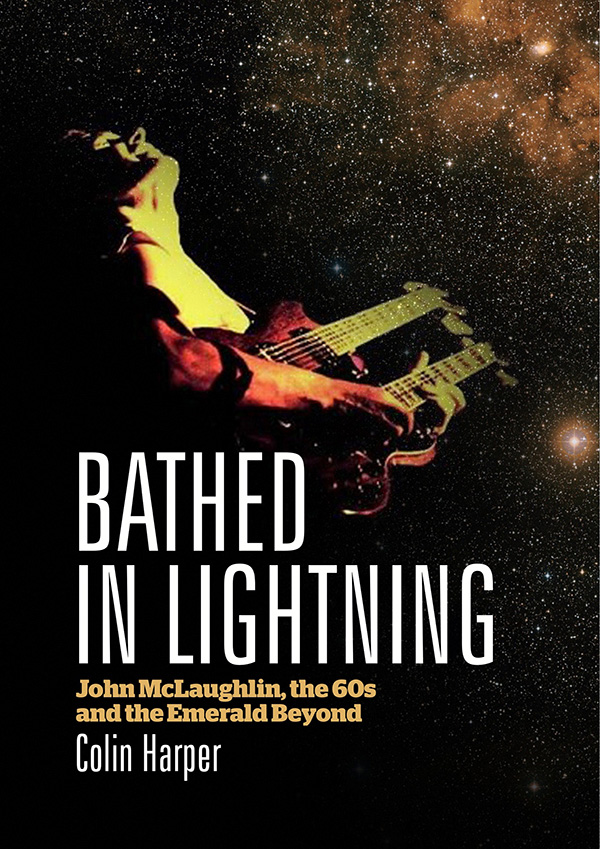 On February 16 1969, John McLaughlin flew into New York, from London, in a snowstorm. The following day, Miles Davis, his hero, invited him to play on a record. Two years later, on the path of Bengali mystic Sri Chinmoy, John launched the Mahavishnu Orchestra—an evocation in music of spiritual aspiration and extraordinary power, volume and complexity, far beyond anything else in jazz or rock.

Curiously, it was also a huge success. John McLaughlin brought rock music to its pinnacle, the end point in an evolution from Mississippi blues through Coltrane, Hendrix and the Beatles. And then, in November 1975, he hung up his electric guitar and walked away from the stadiums of the rock world for an on-going, restless career in music of other forms.

To most of the world, John McLaughlin looked like an overnight success, with a backstory going back only as far as that February in 1969. Yet he had been a professional musician since 1958, experiencing all the great movements in British music—trad jazz, rock’n’roll, R&B, soul, modern jazz, free jazz, psychedelic rock—a guitar for hire at the centre of ‘Swinging London’, a bandmate of future members of Cream, Pentangle and Led Zeppelin, but always just under the radar.

Drawing on dozens of exclusive interviews and many months of meticulous research, author and music historian Colin Harper brings that unrepeatable era vividly to life. This landmark new work retrieves for the first time the incredible career of John McLaughlin before he conquered the world—and then chronicles how he did so.

Bathed In Lightning includes more than 80 photographs of McLaughlin and his collaborators, including many previously unseen images. The extended ebook edition adds 100,000 words of extra material—bonus features, if you like—including detailed discographies and concert listings that cover every known McLaughlin recording and live performance from 1963–75.

Colin Harper wrote professionally on music for The Independent, Irish Times, Mojo and other titles during the 1990s. He is the author of Dazzling Stranger: Bert Jansch and the British Folk and Blues Revival (Bloomsbury, 2000; revised 2006 and 2011) and co-author of Irish Folk, Trad & Blues: A Secret History (Collins Press, 2004).