A Wizard, A True Star
TODD RUNDGREN IN THE STUDIO
PAUL MYERS 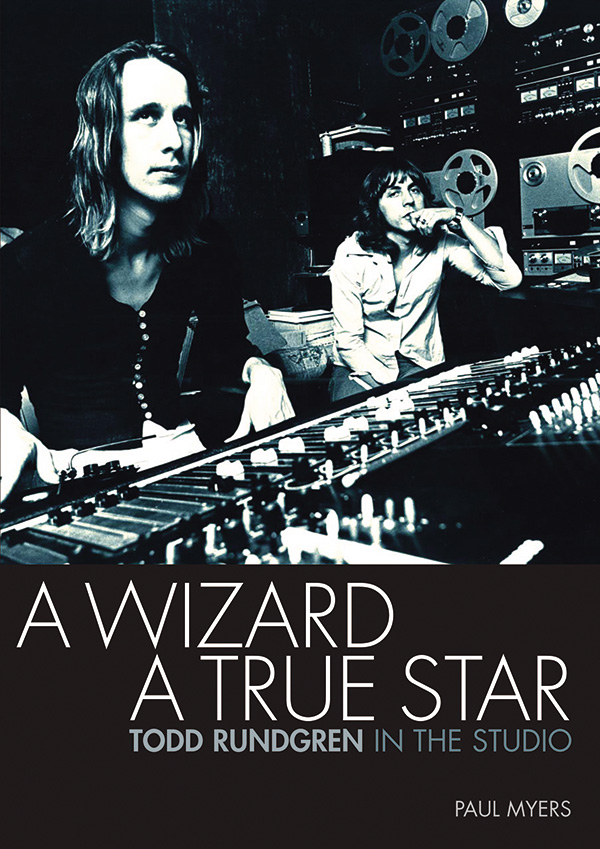 Few record producers possess the musical facility to back up such a bold promise, but in over forty-plus years behind the glass, Todd Rundgren has willed himself into becoming a not only a rock guitar virtuoso, an accomplished lead vocalist and vocal arranger and visionary keyboard player, not to mention a serviceable drummer.

But Rundgren’s greatest instrument of all is the recording studio itself. After learning his craft with Nazz, Rundgren engineered The Band’s Stage Fright album and soon became the producer of a string of noteworthy albums for Sparks, Grand Funk, The New York Dolls, Badfinger, Hall & Oates, Meat Loaf, Patti Smith Group, Cheap Trick, The Psychedelic Furs and XTC. Meanwhile, Rundgren played almost every instrument on his solo albums such as Something/Anything?, A Wizard A True Star and Hermit Of Mink Hollow while collaborating on a series of albums by his band, Utopia.

A Wizard A True Star: Todd Rundgren In The Studio by Paul Myers is a fascinating and authoritative trip through the land of flickering red lights inhabited by a studio wizard – and true star – who has rarely enjoyed a proper victory lap along the many trails that he has blazed. Researched and written with the participation and cooperation of Rundgren himself, Myers also draws upon exclusive new interviews with Robbie Robertson, Patti Smith, XTC, Sparks, Daryl Hall and John Oates, Meat Loaf, Jim Steinman, Cheap Trick, Grand Funk, The Psychedelic Furs, The Tubes, Steve Hillage, all members of Rundgren’s legendary band, Utopia, and many other key Rundgren associates.

Paul Myers is the author of the critically acclaimed biography, It Ain’t Easy: Long John Baldry and the Birth of the British Blues, which garnered rave reviews in Mojo, Ugly Things and Goldmine and the Canadian national paper, The Globe And Mail. Myers was also nominated for a Gemini Award (the Canadian Emmy) for writing the Bravo TV/ BBC 4 television documentary program Long John Baldry: In The Shadow Of The Blues, based upon his book. Additionally, Myers is the author of Barenaked Ladies: Public Stunts Private Stories (Simon & Schuster) an authorized biography of the best-selling Canadian rock band. His writing has appeared in a wide variety of publications, including Crawdaddy, Mix, Electronic Musician, Canadian Musician, The Globe and Mail, The Georgia Straight, the San Francisco Chronicle and the San Francisco Bay Guardian. As a broadcaster, Myers was the host of the Paul Myers Show on Vancouver radio and has appeared on CBC, CTV in Canada and as a pundit on US cable channel VH1’s Behind the Music and as a judge/host on the acclaimed Canadian music reality series, Popstars: The One. Myers is also an accomplished songwriter, guitarist and producer whose current project is The Paul & John, an original duo based in San Francisco. Born in Toronto, Canada, Mr. Myers now lives with his wife Liza, and their cat Buddy Guy, in Berkeley, California.